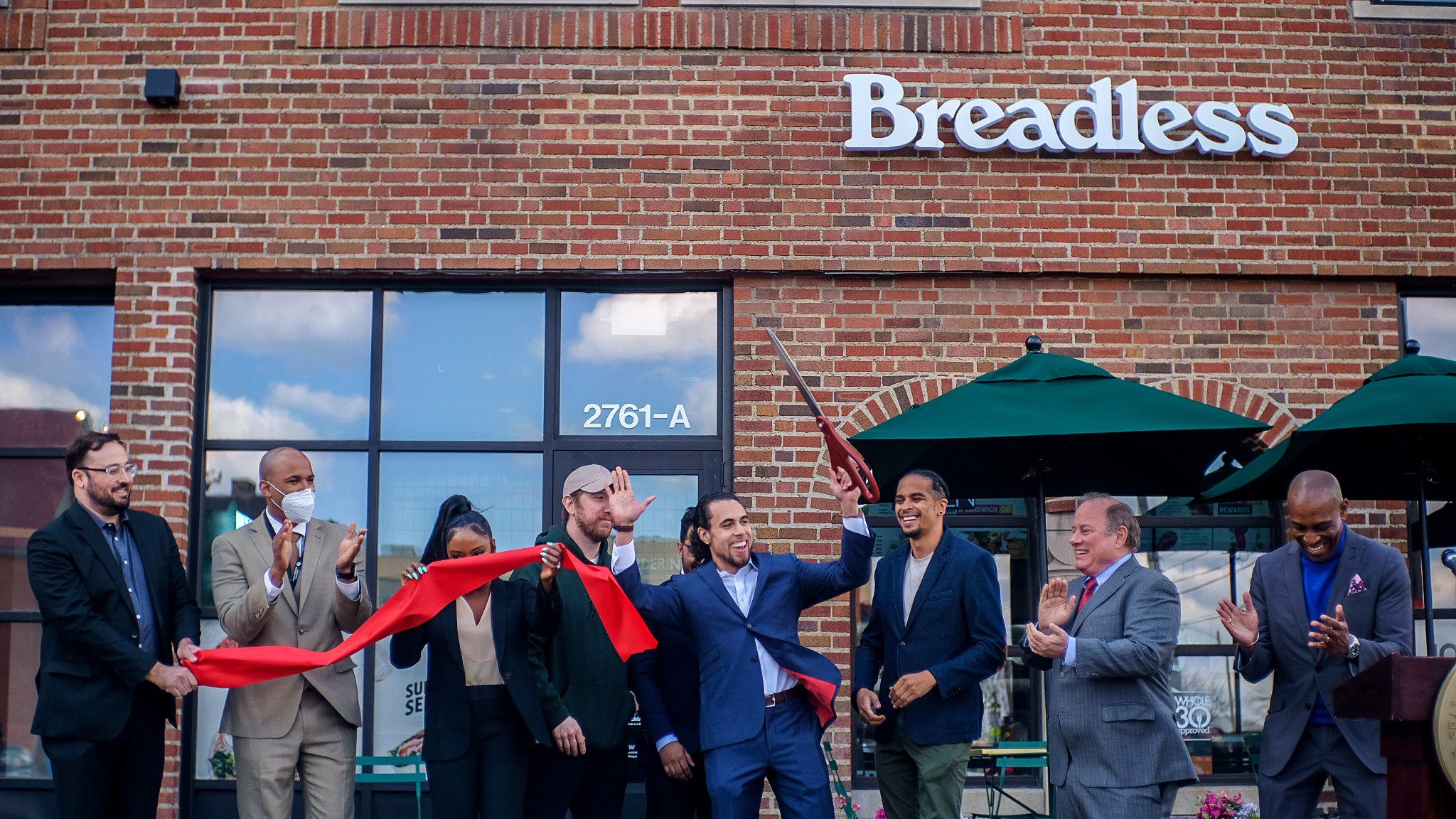 DETROIT – City officials including Mayor Mike Duggan and community members celebrated the grand opening of the latest Motor City Match winning business – a new restaurant that serves on-the-go breadless sandwiches. Breadless, which offers sandwiches wrapped in leafy greens, will open the doors of its restaurant on the new Joseph Campau Greenway Connector, near the Detroit Riverfront. The new location is at 2761 E. Jefferson Ave.

An awardee of both the Motor City Match Develop Track in Round 17 (formerly the “Space Track”) and Cash Track in Round 18, Breadless worked with Motor City Match on site selection, project development, and construction. Breadless used MCM Technical Assistance funding for help with the planning and design of the space and used a $50,000 MCM Cash grant to complete its build out. The unique restaurant is one of five Black woman co-owned businesses that were awarded grants from MCM in Round 18.

“I started Breadless because I struggled for 10 years to find healthy, on-the-go food options that fit into my clean eating regimen,” said Howland, co-founder and CEO of Breadless. “What’s more, iceberg lettuce, which has (minimal) nutritional value, is the go-to because it’s cheap and easy to work with. There is simply no existing concept with exclusive focus on wrapping sandwiches in nutritious, leafy super greens, until now.”

The leafy greens include Swiss chard, turnip greens, and collard greens. The menu offers customizable ingredients inside the greens as well as pre-conceived sandwich options. The sandwiches are designed to be portable, low-carb, and gluten free. The location was designed with accessibility, convenience, and COVID-19 safety, in mind. It features online order and pickup, grab and go, a walk and bike up window, delivery, catering, and a stationary drive-thru where customers can order in a designated parking spot and have food delivered to their vehicle.

“Breadless is a great example of how aspiring entrepreneurs can receive help from Motor City Match at various stages of their journey to opening their own business,” said Mayor Mike Duggan. “The team at DEGC helped Marc, Ryan and LaTresha find their space and then provided the grant funding they needed to build it out. Today, Breadless is in a perfect spot, where people walking, jogging or biking along the new Joseph Campau Greenway outside their front door can stop for a healthy, low-carb meal.”

Breadless is one of 132 open brick-and-mortar businesses that have received support from MCM and is located near several other MCM-supported businesses, including The Wise Decision, Eats All Good, Grind Grind, Trap Yoga and Dymond Designs Beauty School.

More than 80 percent of all MCM businesses are minority-owned, 71 percent are women-owned and 64 percent are owned by Detroit residents. The program continues to have a significant positive impact on Detroit’s small business community, including:

Learn more about Breadless at eatbreadless.com

Motor City Match is a partnership between the City of Detroit, the Detroit Economic Growth Corporation, the Economic Development Corporation of the City of Detroit, and the U.S. Department of Housing and Urban Development. Competitive financial assistance is supported by a broad partnership of financial institutions, corporations, and agencies. DEGC leads Detroit’s business retention, attraction, and economic development initiatives. It is dedicated to inclusion, equity, and access to economic opportunity. Follow DEGC and MCM on Facebook, Twitter, Instagram, and LinkedIn. www.degc.org, www.motorcitymatch.com