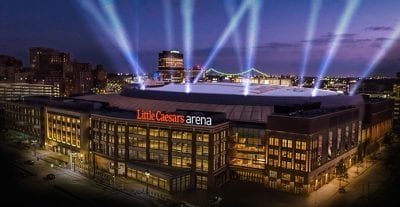 Nearly five years and countless DEGC staff hours culminated in the ribbon-cutting at the new Little Caesars Arena in Detroit Sept. 5, 2017. Crowds gathered under sunny skies in Chevrolet Plaza at the corner of Woodward Ave. and Henry St. to witness the monumental event, which included remarks from a variety of city and state dignitaries.

The new 20,000 seat arena is the centerpiece of a 50-block area of the city dubbed The District Detroit that will include development of office space, retail, housing and hotels.

“What started as a hockey arena is now a world-class multi-purpose facility that unites Detroit’s four professional sports teams within a four-block area of the city core,” said Long.

“All four major sports teams haven’t been together in Detroit since 1975, and the arena opening makes Detroit the only city in America that has all of its teams downtown. The arena will now host events 225 days of the year, bringing additional economic opportunity to the city and its residents in terms of jobs and new business creation.

“The DEGC, acting as the city’s non-profit economic driver, was instrumental in every facet of the area’s development, including bond sales, construction management and innovative incentive development. The DEGC has been Detroit’s catalyst for economic growth and opportunity for nearly 40 years, and our participation in the development of The District Detroit will maximize financial benefits for all Detroiters,” said Long.

DEGC facilitates large projects like Little Caesars Arena that bring jobs and revenue to the city. Other recent investment brought to Detroit by DEGC include a $95 million manufacturing facility from automotive supplier Flex-N-Gate in the I-94 Industrial Park on the city’s east side and a $57 million Sakthi Automotive investment at its campus on the city’s west side.

In addition to helping bring the Detroit Pistons back to the city, DEGC is also working with developers on the development of the team’s new corporate headquarters in Detroit.

DEGC’s D2D Program was instrumental in ensuring Detroit businesses were a major part of the arena’s construction. Ilitch Holdings reported the following statistics regarding state and city business utilization/employment:
• 94% of construction contracts for LCA were awarded to Michigan businesses.
• 61% were awarded to companies in Detroit, totaling nearly $475 million.
• LCA represented the most hours worked on a single project by Detroiters in over 40 years.
• 836 new skilled-trades apprentices were trained during the arena construction.
• 2,000 people will be hired in post-construction jobs.
• 61% of these jobs will be filled by Detroiters.

One of those apprentices trained was Detroit resident John Perkins, now a project engineer at Barton Malow.

“You change a person’s life when you give them an opportunity to work,” Perkins said. “This project opened doors that I didn’t know existed. I’m proud to have helped build this arena alongside other hard-working Detroiters. ”

• Led negotiation of Memorandum of Understanding approved by the DDA in June, 2013
• Led negotiation of Concession Management Agreement originally approved by DDA in December, 2013
• Managed process to amend DDA TIF plan in 2013 to allow Catalyst Development taxes to be captured to finance arena construction and to support other development in the district – approved by DDA, Detroit City Council and the Michigan Strategic Fund (MSF)
• Managed process to sell $250 million in bonds to finance the public portion of construction – approved by DDA and MSF in December, 2014.
• Monitored subcontract bidding process on behalf of the DDA throughout construction – 2015 to present
• Participated in negotiations for Memorandum of Understanding that returned the Pistons to Detroit – approved by the DDA in November, 2016
• Managed approvals of $233 million in private ancillary development in the District Detroit to date
• Managed DDA and City Council approvals of amendments to DDA TIF plan in June, 2017 to allow Catalyst Development taxes to finance arena construction changes required for the Pistons
• Managed subsequent sale of $36 million in bonds to finance the construction required by the Pistons
• Managed approvals of Brownfield tax increment financing, and real and personal tax abatements in June, 2017 to accommodate development of the new Pistons corporate headquarters and practice facility in New Center.