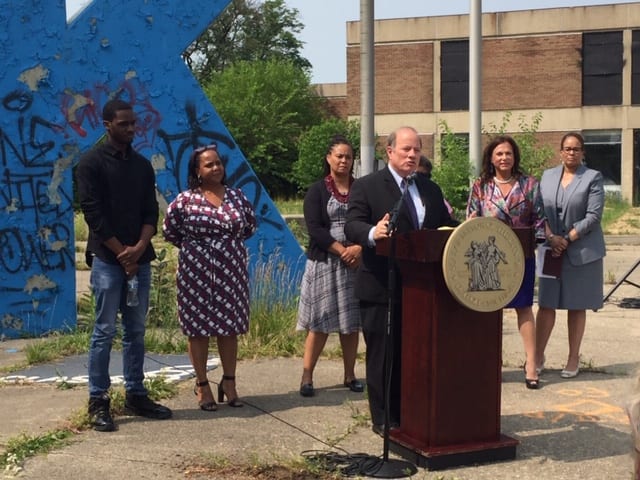 The DEGC joined City of Detroit officials yesterday to celebrate Dakkota Integrated Systems’ plan to build a $55 million manufacturing facility at the site of the vacant Kettering and Rose schools on Detroit’s east side. The new 600,000-square-foot plant is expected to create 625 jobs in assembly operations, material handling, quality inspection and skilled trades to supply parts to FCA’s newly announced Jeep plant.

This opportunity aligns with DEGC’s ongoing land assembly strategy to leverage appropriate, underutilized sites to meet the demand by manufacturers seeking a location in Detroit. This includes suppliers like Dakkota that will support the new FCA plant, as well as others that will bring new jobs with a priority for Detroit residents.

“As soon as we finished the FCA deal, we immediately got to work to bring suppliers to the area,” said Mayor Mike Duggan. “(Yesterday we) announced one of the first, thanks to Andra Rush and Dakkota, which will bring hundreds of more jobs to the east side. Even better, Dakkota has agreed to give Detroiters the first shot at these jobs through Detroit at Work.”

For its new site, Dakkota will purchase approximately 32 acres of land located on the city’s east side from Detroit Public Schools Community District for $2.6 million. To honor the history of the schools, Dakkota plans to preserve the giant blue Kettering “K” on its site and move existing park equipment to a new location. The plant is slated to begin operating assembly lines in late 2020.

Dakkota has committed to recruiting Detroiters from the Detroit at Work priority application list for jobs at its new plant. Returning citizens will also have an opportunity to participate in the job application process, as Dakkota’s job application “bans the box,” deleting the question that asks whether an applicant has been convicted of a felony.

“We’re excited to bring good manufacturing jobs to the east side of Detroit,” said Andra Rush, CEO and president, Dakkota Integrated Systems. “We’re so proud to support FCA, provide employment opportunities in Detroit, and showcase world-class quality auto parts built by hardworking Detroiters. This is a win for all parties.”

When Dakkota opens its application process, it will first conduct interviews from a list of Detroiters who have registered through Detroit at Work before engaging the public. For applicants to get on the priority list, they must live in the city of Detroit, meet Dakkota’s job criteria and attend a Detroit at Work Job Readiness event.

Job Readiness events are being held across the city throughout the summer. Individuals at the events will ensure Detroit residents meet the minimum qualifications to be hired at the facility and other plants. Detroiters who do not meet all requirements during the time of application will be offered assistance through Detroit at Work to help them become eligible when the early application window opens. Detroit residents can pre-register now here.

“This is the first of what we expect to be several new industrial facilities created by FCA’s presence in Detroit,” said Kevin Johnson, President and CEO of DEGC. “We are building a vertical supply chain in Detroit that can satisfy any automotive demand and extending Detroit’s global leadership in the auto and mobility sectors.”