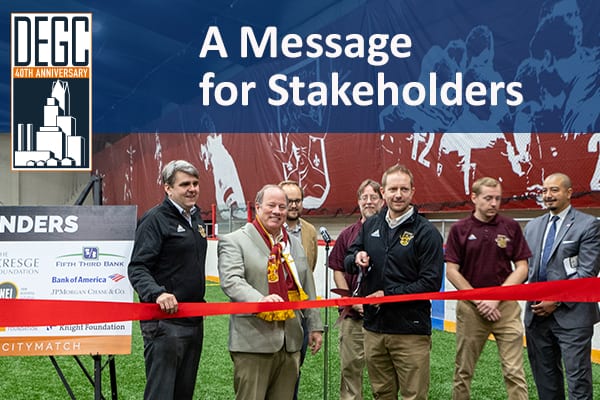 Today, our team celebrated the opening of our latest Motor City Match business—Detroit City Fieldhouse, a home for Detroit’s neighborhood-based recreational soccer teams. We worked with owner Todd Kropp as he renovated a former ice rink in Detroit, turning it into a 75,000-square foot indoor soccer facility that will serve as an affordable and accessible playing space for the Detroit’s growing soccer community.

This unique Motor City Match business will include boarded and non-boarded playing fields, which will be used primarily for adult recreational soccer leagues with availability for multi-sport use. Detroit City Fieldhouse will also offer co-ed, women’s, men’s and youth leagues that will play on the indoor fields, starting in October. The business will also have rentable event space for teams.

Detroit City Fieldhouse is the latest Motor City Match business to open its doors in the city, bringing us up to 43 open businesses.

That’s 43 new storefronts all throughout the city of Detroit, creating jobs, generating tax revenue, creating density and most importantly, providing Detroiters with the goods and services they need, keeping our spending power right here in the city. Three years in, and we’re still proving exactly why Motor City Match is so important to the equitable development of our city.

As the program has evolved, we’ve been able to create a pipeline to help take businesses from idea to open, with business planning, design, space and cash grant assistance. Through these resources, we’re able to assist businesses like Detroit City Fieldhouse with its opening.

Detroit City Fieldhouse is a Motor City Match Round 10 cash grant winner and received $40,000 to assist with its opening. The business is also home to another Motor City Match business, Rebel Cycle Studio LLC, which offers various cycling classes. Clustering businesses together is a part of our overarching strategy to build density throughout our neighborhoods.

To date, the DEGC’s Motor City Match program has helped to open 43 businesses across Detroit, providing $6 million in grants and catalyzing $39.6 in investment. Of the 1,150 MCM businesses, 61 percent are Detroiters and 80 percent represent minorities.

And we’re not slowing down anytime soon.

Visit Detroit City Fieldhouse during its hours of operation: